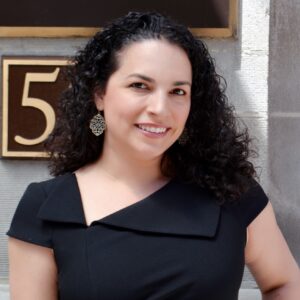 Nicole Gonzalez Van Cleve is an Associate Professor in the Department of Sociology at Brown University and an affiliated scholar with the American Bar Foundation in Chicago, IL.

She is the award-winning author of the book, Crook County: Racism and Injustice in America’s Largest Criminal Court. Crook County won 11 awards or finalist distinctions for its contribution to the areas of sociology, law, criminal justice, media and social justice including the discipline’s highest book honor, The American Sociological Association’s Distinguished Book Prize.  In the area of publishing, Crook County is a two-time Prose Award Winner (For Excellence in Law and Legal Studies and for Excellence in Social Sciences) and a Silver Medalist awarded by the Independent Publisher Book Awards. In the area of social justice, Crook County was a finalist for an NAACP Image Award in the category of “Outstanding Literary Work – Debut Author” and a Finalist for the National Council on Crime and Delinquency’s Media for a Just Society Award.

Her new book, The Waiting Room, (Amazon Original Stories) examines life around the Cook County Jail and how the suffering – caused by pretrial incarceration – extends beyond the cages and into the communities.  Gonzalez Van Cleve is a prolific public scholar and has contributed articles to The New York Times, The Atlantic, NBC News, Crain’s Chicago Business, and CNN.  Her legal commentary has been featured on NPR, NBC News, CNN, and MSNBC’s The Rachel Maddow Show.

Professor Gonzalez Van Cleve’s research is motivated by a central concern: theoretically challenging conventional paradigms driving the study of race and racism and placing these concerns squarely in the mainstream of sociology as well as the sub-fields of law, organizations and cultural sociology. Overall, she imports a cultural theoretical perspective (rooted in cultural sociology) to the study of discretion and bias in organizations and show how these dynamics affect the law. Substantively, her research addresses the equitability of laws, the creation of racial meaning, and the ‘consumer experience’ of criminal justice institutions. She applies a range of methodological and analytic approaches, which include traditional ethnography, comparative ethnography, content analysis, historical/archival work, and innovative large-scale, semi-structured fieldwork.

Her article Criminal Justice through ‘Colorblind’ Lenses published in Law and Social Inquiry is emblematic of her focus on theoretically innovating how the variable of race is treated within the field of criminal justice and the social sciences, more broadly. The article is a call-to-action for empirical scholars to take a critical race approach to empirical work in the fields of sociology, criminal justice, law and punishment. This article is the winner of the 2017 the Kimberlé Crenshaw Outstanding Article Award from The Society for the Study of Social Problem’s (SSSP) Division on Racial and Ethnic Minorities.

Her recent Criminology article (with Professor Armando Lara-Milan), The Organizational Utility of Welfare Rationale in the Criminal Justice System, elucidates the use of ‘welfare stigma’ or stereotypes about poor people’s overreliance and abuse of public aid in two core criminal justice functions: felony adjudication in a court system and space allocation in a jail. The comparative nature of their data reveals that welfare stigma has inter-organizational utility by serving two different organizational goals: It streamlines convictions in courts, which pulls defendants through adjudication, and conversely, it expands early release from jails, which pulls inmates out of the custody population. The article won the 2017 Distinguished Article Prize awarded by the Sociology of Law Section of the American Sociological Association.

Prior to receiving her Ph.D., Van Cleve served in The Office of the Chief of Staff at the White House during the Clinton Administration and subsequently worked for five years as a Consumer Brand Planner for Leo Burnett, USA.  She is the former Research Director for Chicago Appleseed Fund for Justice – a policy/nonprofit organization that specialized in legal advocacy.